The Metamorphoses of Ovid: Book 1

Through the traditional Greek and Roman legends, Ovide tells in fifteen songs or books (representing more than twelve thousand verses), a set of concise stories about the metamorphoses of gods, goddesses, heroes or mere mortals. Here are the accounts of the first book (Origin of the World. Man. The Four Ages of the World. The Giants. Lycaon. The Flood. Deucalion and Pyrrha. Python. Daphné. Io, Argus, Syrinx and Pan) illustrated through the collections of museums of France online on Mona Lisa.

- Daphne, nymph, daughter of the Pénée river, pursued by Apollo, and turned into laurel (about 452-567).
- Io, nymph, daughter of the Inachus river, metamorphosed into heifer (circa 568-747).
- Argus, guardian of the heifer Io, asleep by Mercury with
- the story of the nymph Syrinx and Pan, which allowed Mercury to kill Argus (circa 670-747).

"The object of the first love of Phoebus [Apollo] was Daphne, daughter of the Penee River; this love was not born of blind chance, but of the relentless anger of Cupid.
... from the quiver containing his arrows, he [Cupid] drew two strokes, destined for two very opposite tasks: one puts in flight, the other gives birth to love.
... one reached the nymph daughter of the Péné; but from the first, he wounded Apollo, crossing his bones to the marrow. Immediately, one loves; the other shuns the name of lover ...

At the end of her strength, she [Daphne] faded and succumbed to the fatigue of this rapid flight, turning her eyes towards the waters of the Pelee: "Help me, my father," she said, "if you rivers have a divine power, and make me lose, by transforming it, that appearance which made me too pleased!".
[Daphne turns into laurel]
... Then the god: "Well, since you cannot be my wife, you will at least be, he says, my tree. Always it is of you that my hair, of you that my zither, oh laurel, of you that my quiver will adorn..."

Daphne on the Mona Lisa

"The Inachus [River of Argolida], alone, is missing, and hidden in the depths of his den, swells his tears; he weeps at the height of misery, his daughter Io, whom he considers lost...
As she [Io] returned from the banks of the river her father, Jupiter had seen her and: "O virgin worthy of Jupiter, and who will make the happiness of him - what will he be? - that you will admit to your bed, come and taste the shadow of the high forests", ...

She was running away. She had already left behind her the pastures of Lerne and the fields planted with trees of Lyrcéion, when the god, covering the earth in the distance with a thick cloud, obscured it, stopped the escape of the nymph, and stole her honor. However, Juno, from heaven, cast his eyes in the midst of Argos ...
Jupiter had guessed the arrival of his wife and transformed the daughter of the Inachus into a heifer with shiny flanks.
[Jupiter is obliged to offer the heifer to his wife who entrusts it to the custody of Arestor’s son, Argus. Jupiter sends Mercury to kill Argus].
Once the goddess Juno has calmed down, Io regains her first appearance, becoming again what she was."

Mercury and Argus; Syrinx and Pan

[Juno entrusts Io, transformed into a heifer to the custody of Arestor’s son, Argus].
"Argus had a head girded with a hundred eyes, and so, two by two, in turn, they gave themselves up to rest, while all the others remained on watch.

[Jupiter sends Mercury to kill Argus.]
In an instant, he tied his wings to his feet, grabbed in his powerful hand the rod that dispenses sleep and put on his headgear. These arrangements taken, the son of Jupiter, from the top of the paternal sky, leapt to earth ...
"Hey, whoever you are, you could sit with me on that rock," said Argus ...

[Mercury, with a pipeau unsuccessfully tries to put Argus to sleep, so it tells the story of the nymph Syrinx]
"... he was a naiad, the best known of all; the nymphs called him Syrinx. More than once she had foiled the pursuits of the satyrs themselves and of the gods of all kinds ...
As she was returning from the heights of the Lycée, Pan sees her, ..., he addresses these words to her ... Mercury was left to relate these words, to recount the escape of the nymph, ... she had prayed to the water nymphs, her sisters, to transform her; and how Pan, who thought he was already a master of Syrinx ..., had kept nothing but reed palustres ...". And thus, thanks to the unequal reeds assembled between them and retained by wax, he had preserved the name of the girl.
As he [Mercury] was preparing for this account, he saw that all Argus' eyes had succumbed to sleep, closing their eyelids... Without further ado, with his curved sword, he strikes the inclined head of Argus ...

Saturn’s daughter [Juno] collects her eyes and places them on the feathers of her bird [the peacock], whose tail she covers with a constellation of gems."

Mercury and Argus on Mona Lisa

Syrinx and Pan on Mona Lisa 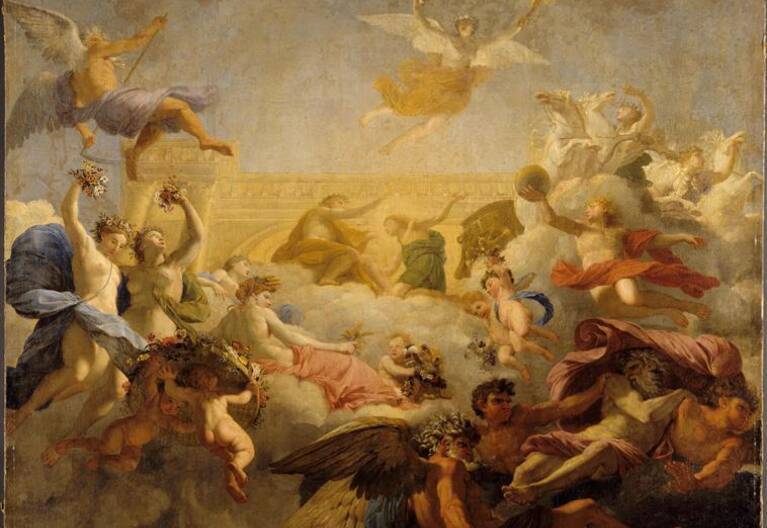 The Metamorphoses of Ovid 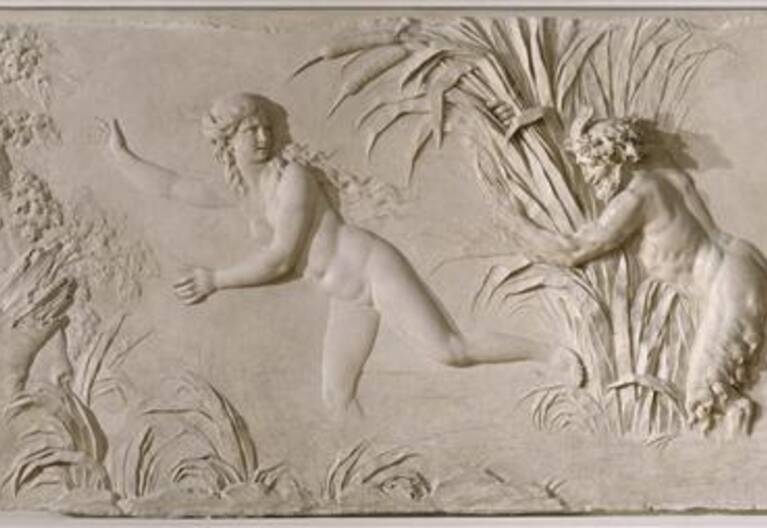 The Metamorphoses of Ovid: Book 1 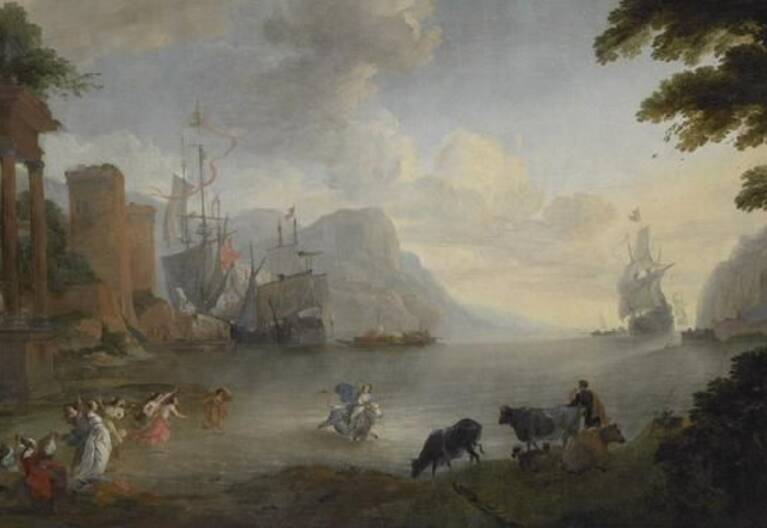 The Metamorphoses of Ovid: Book 2 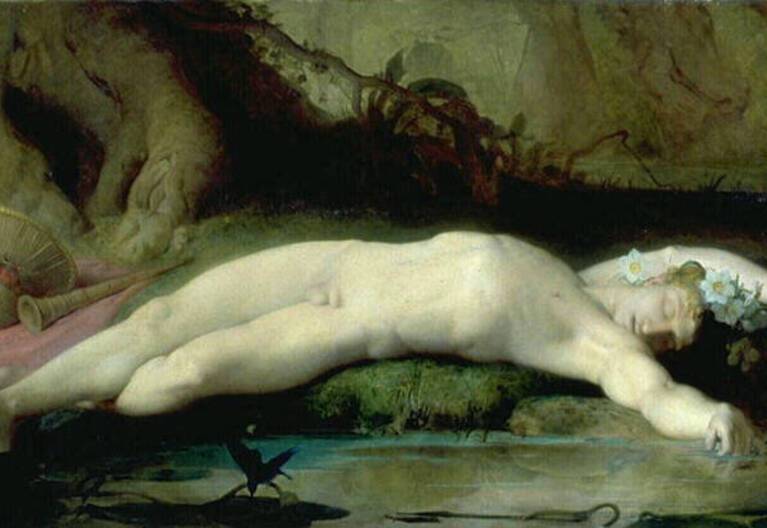 The Metamorphoses of Ovid: Book 3 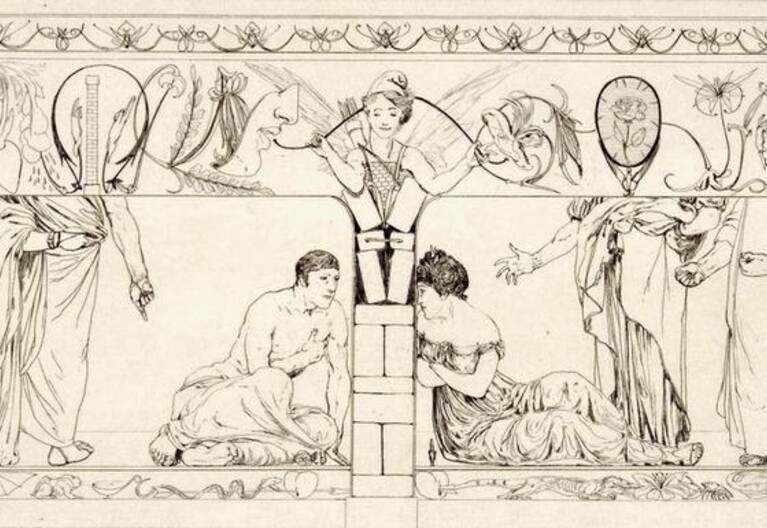 The Metamorphoses of Ovid: Book 4 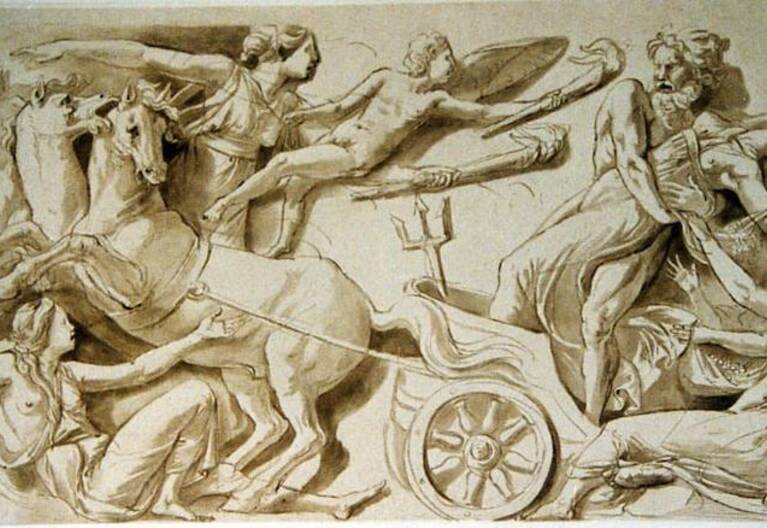 The Metamorphoses of Ovid: Book 5 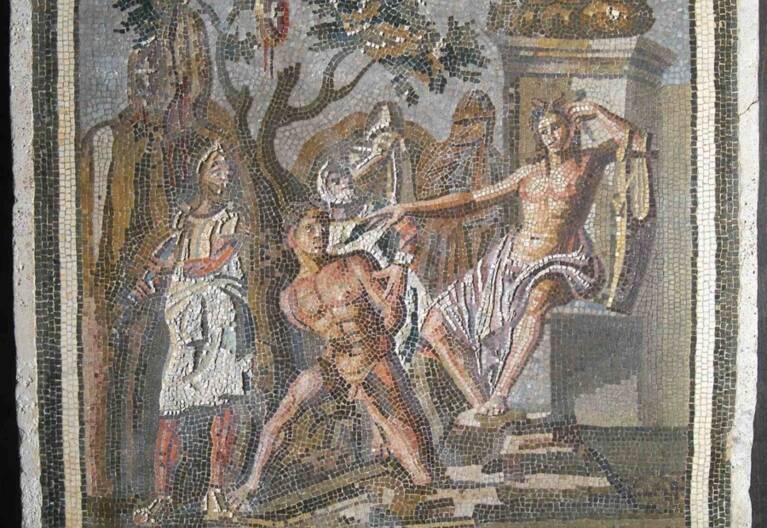 The Metamorphoses of Ovid: Book 6 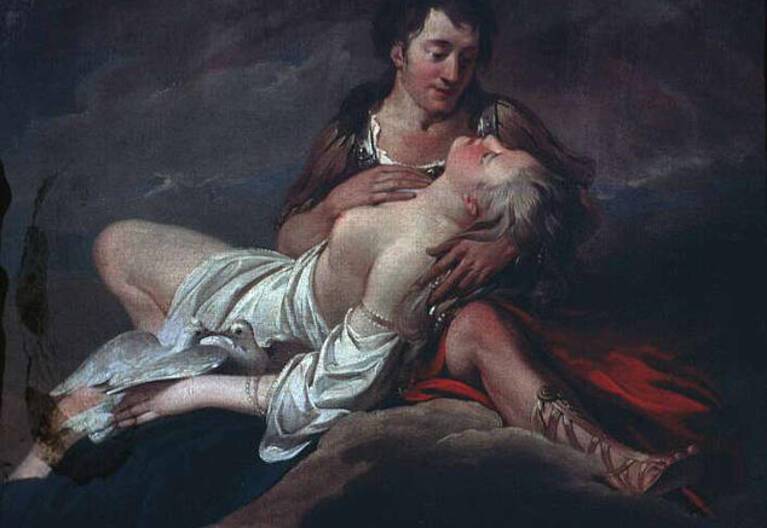 The Metamorphoses of Ovid: Index of characters