An immersion in the heart of the restoration site of the roofs and high bays of the nave is proposed through virtual tours.

The restoration of the Saint-Gervais-Saint-Protais de Soissons Cathedral in the Aisne region funded under the Recovery Plan continues. On this occasion, an immersion in the heart of the construction site is proposed through a series of videos.  In particular, they provide an opportunity to discover the know-how applied by specialised companies.

The Saint-Gervais-Saint-Protais de Soissons cathedral is located in the department of Aisne, in the Hauts-de-France region. Property of the State, it is classified in its entirety as Historical Monuments by the list of 1862. It belongs to this core of large Gothic cathedrals (of Ile-de-France and Picardie) which are at the origin of the diffusion of this great architectural movement, which then spread throughout Europe. It remains less well known than many of its sisters, however, because of the loss of the decoration of the three portals of its western façade and the incompleteness of the north tower, which gave it an austere appearance that does not reflect the original party.

The building also suffered greatly during the First World War: it was bombed in 1915 and then in 1917. At the end of the conflict, the high covers had essentially disappeared or were ruined. The frames, which were badly shaken, were still in place and restorable, with the exception of the three west bays of the nave, which had disappeared, as well as the masonry that carried them. During the restoration of the frames of reinforced cement structures were introduced into the disappeared bays, according to the spirit of what was done elsewhere (such as the frames of the Cathedral of Reims). The remaining oak frames have been restored.

The restoration of all the covers begun in the 1920s was made of slate. This restoration was part of a progressive movement to replace the tile (introduced at the end of the 16th century to replace lead) with slate. This cover material, also used for the adjoining buildings (and perhaps for the north slope of the nave from this period according to the documentary study) and for the large sacristy during its construction during the last third of the 18th century, was systematically implemented from 1832, except during the period of activity of the architect Corroyer, who covered the south transept arm and the chapel in glazed tiles (type tiles were found in the attic and covered the south side).

The choice of slate for high roofs was questioned during the restoration of the north transept arm cover in 2009-2010, which was made of glazed tiles.

The National Commission of Heritage and Architecture before which the file was presented on March 28, 2019, has chosen the second solution, the current state being that of the post-war restoration of Brunet-ACMH, which was implemented in the 1920s-1930, the period of reference chosen for the cathedral. The work programme adopted by the DRAC respects and takes up the choice of the CNPA: the covers of the nave and the choir will be made of slate.

Purpose of the transaction

This operation is a continuation of the diagnostic study prior to the restoration of frames and high roofs, led by Olivier WEETS, Chief Architect of Historic Monuments, in November 2017. Initially, the scope of the operation included only the slate framing and roofing of the high roofs of the nave and choir.

Because of the installation of heavy scaffolding from the covers of the chapels and aisles, the question arose of optimizing these installations to intervene also on the high windows, whose worrying health of the choir’s stained-glass windows had already required the removal of all the panels of the five historiated windows in 2019. For the nave, many diamond-shaped bay windows had leakage defects.

Thanks to the Government Recovery Plan, the perimeter of the operation was expanded to include the stained glass windows of the nave and choir as well as the fire protection of the large attic.

The operation consists of two tranches:

- first tranche (firm tranche of the operation): roofs and high bay of the choir and fire overlapping of the large attic: 4.5 M €

- second phase (optional phase of the operation): roofs and high bay windows of the nave and installation of a fire safety system: 5 M €

It was decided to adopt an appropriate fire safety system for the preservation of the architectural and historical heritage and for the protection of the people who frequent these places in the various activities carried out in the cathedral of Soissons. The attic volumes, intersected by fire barriers, will be equipped with a fire detection system. Dry columns will be installed.

Restoration of masonry and sculptures

The paving of the gangway forming cheneau on the top parts is in very bad condition. The bahut walls also present numerous breakages and gaps, causing structural failures and an alarming risk of fall. The high masonry of cut stone will therefore be refurbished and the chaneau will be dressed in lead, to ensure a better durability of the structures. The carved decorations will be restored in conservation or restored in research, like gargoyles for example. Some curious characters were raised during the studies, they are found on the buttresses of the choir or on the cornice carved all along the facade.

Despite regular maintenance campaigns conducted by the State services, the high covers of the choir and the nave are now reaching their limit of use. Indeed, during the post-war work, slates of unsuitable size and thickness were used, explaining the many alterations observed in the study. As is common, waterproofing defects are also particularly common in the case of metallic accessories (zinc and lead) which are also end-of-use. All the covers and associated works will be redone identically: the use of slate is maintained. Overall, the structures exhibit a low state of degradation, with point disorders resulting mainly from roof leakage. A structural conservation restoration will be carried out during the work.

The stained-glass windows of the choir (bays 100 to 104) partially date from the 13the s. In 2019, and on the recommendation of the chief architect due to the advanced oxidation of the fixing frames, the panels were deposited and stored in the Centre de Conservation et d'Etudes de Soissons. In order to preserve the light atmosphere of the choir and while waiting for the restoration work, temporary protective panels «dummy» were installed.

The diagnostic study prior to the restoration of the high bays of the choir carried out in September 2017 and approved by the Regional Conservation of Historic Monuments, revealed glasses with many mechanical breaks, alterations in the surface caused by air pollution, detachments of firedamp (cooked paints), traces of oxidation from fixing scales, etc.

Thanks to the installation of interior scaffolding in autumn 2016, a careful examination of the stained glass windows was carried out. In this context, the chief architect of historical monuments combined the skills of specialized restorers and relied on the scientific expertise of the Historical Monuments Research Laboratory. These various studies have made it possible, on the one hand, to determine precisely the criticism of authenticity of each panel and, on the other hand, to propose a restoration party adapted to the pathologies encountered.

This critique of authenticity will be complemented by a targeted study of a Chastel center, a research laboratory specialized in stained glass.

All stained glass windows will be deposited and transported to the workshop for restoration:

On the occasion of the elaboration of the project studies, some ancient lobes from the oculi of the choir that had been deposited during the First World War and stored in the premises of the Research Laboratory of Historical Monuments in Champs-Elyséeson-Marne were found.

They will be restored and reintegrated into the building. However, the central medallions depicting the characters have not been found. They will be the subject of new creations, in a harmonious style with all the old stained glass windows. 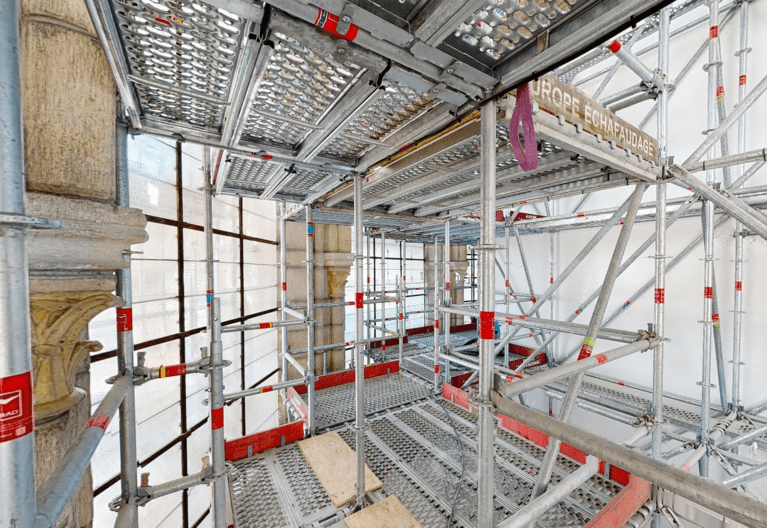 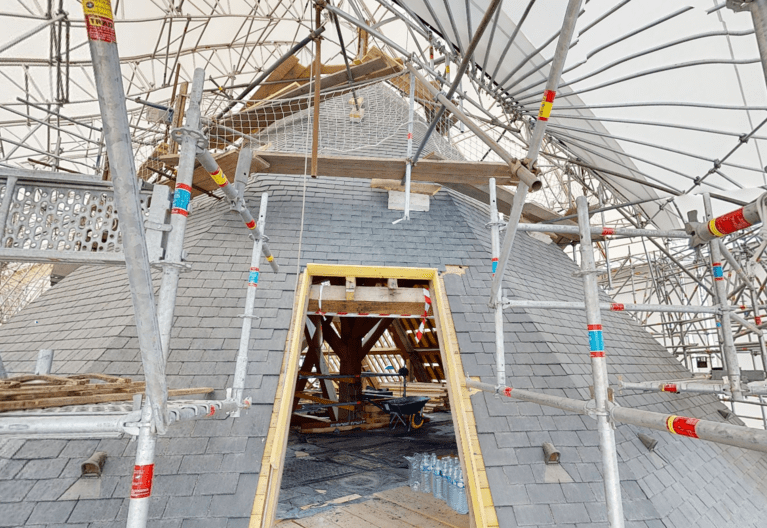 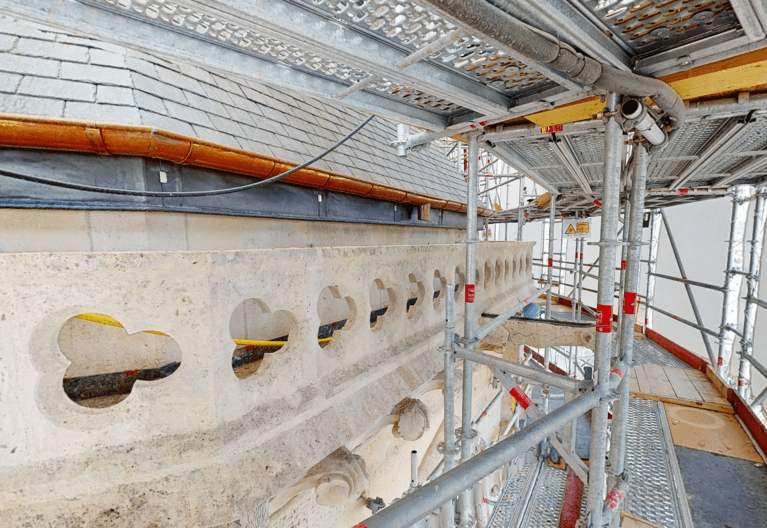 The Rose - Phase 2: Laying the Stones 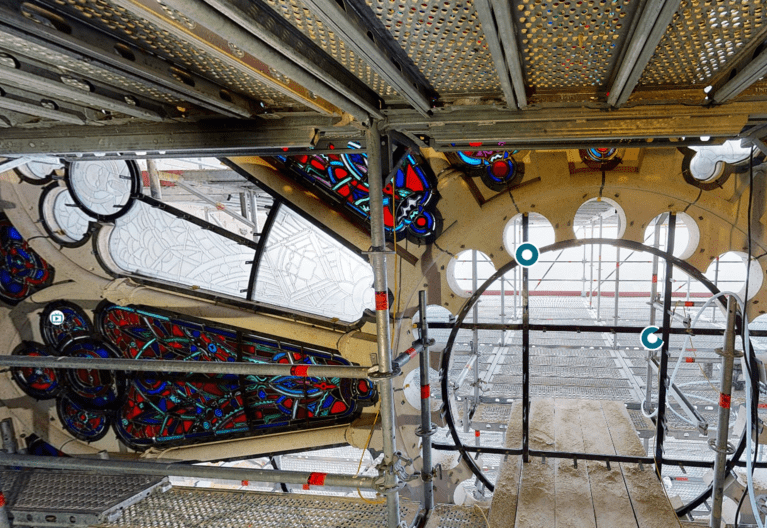 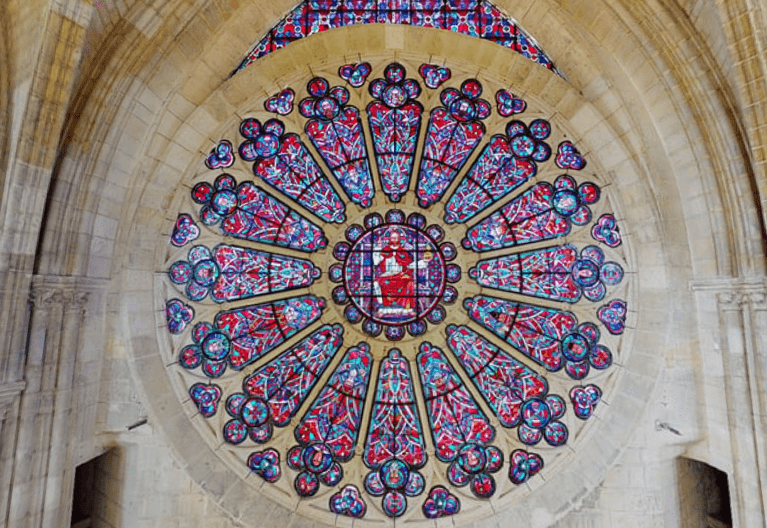